Backyard Chickens in the City 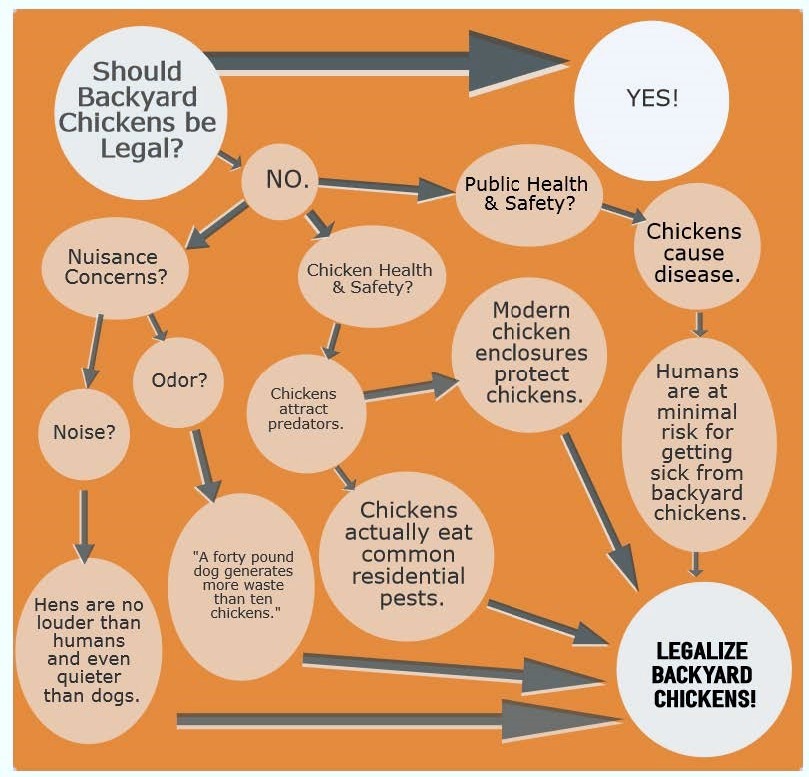 Cities throughout the United States increasingly support the raising of backyard chickens. North Carolina cities such as Raleigh, Charlotte, Winston-Salem, Durham, and others have already implemented successful policy changes. Some North Carolina municipalities have ordinances within their records that do not allow backyard chickens; these are often rooted in historical policies that developed during a period of urbanization in the early 1900s. Policy makers were concerned with public health, safety of chickens, and potential nuisances.i Today, these concerns can easily be mitigated through policy solutions, education, and thoughtful enforcement, which are outlined in this brief.

Chickens provide a plethora of benefits: eggs as an affordable and nutritious source of food, fertilizer for gardens, sustainability via local food production, education for young people, family pets, and a way to kill agricultural pests.

Backyard poultry ordinances in municipalities differ relative to city size, existing ordinances, amount of rural and urban land, and the municipality’s ability to enforce the ordinance. For example, Durham, NC, has specific ordinances for keeping chickens, while other cities, like Charlotte, NC, embed backyard chicken rules into preexisting general animal ordinances. Effective municipal ordinances on backyard chickens often address the following elements, described below with specific language attached in appendices.iii Note that some of the sections are duplicative due to the interconnected nature of the concerns and the way to mitigate these concerns.

Perhaps the biggest concern for municipalities when considering backyard chickens is the possibility of public nuisance, so it can be useful to address this issue in a poultry ordinance. Having an all-encompassing nuisance clause at the beginning of the ordinance can immediately address and emphasize other parts of the ordinance.iv Some ordinances have overarching nuisance clauses, like Charlotte, NC, while others specifically address chickens as a nuisance, like Nashville, TN (see Appendix 2).

An important part of maintaining backyard chickens is providing a proper shelter. An enclosed lock-able shelter mitigates the concern that chickens will escape, alleviating nuisance and safety issues. To improve safety measures, municipalities often provide specific physical regulations for chicken shelters. One commonality across ordinances is that shelters must be easily accessible to clean and repair. Other ordinances include specifics on cleaning the shelters, storing food, disposing dead chickens, and dealing with chicken waste/manure to ensure the shelters remain sanitary (see Appendix 3). To further relieve noise and odor concerns for surrounding properties, ordinances sometimes include specific distances between a shelter, property lines, and the owner’s residence. Note that guidelines for the distance and placement of the shelter should consider issues of equity for people with smaller properties (see Appendix 3).v

Regulations within shelter guidelines can protect chickens’ safety, however disease and sickness may still occur.vi For this reason, clauses may contain regulations that require owners to regularly check their chickens’ health status. Furthermore, some ordinances address chicken fighting and other aspects of inhumane chicken treatment to ensure that owners do not abuse their birds. An example of these guidelines is currently in effect in Nashville, TN (see Appendix 4). Ordinances that ensure humane treatment are useful to alleviate potential concerns of owners cruelly handling their chickens.

Number of Hens and Roosters

An important issue to address is the number of chickens permitted per residence. Some ordinances have a specific number or range of hens (female chickens) allowed per residence, like Winston-Salem, NC (see Appendix 5). A reasonable number of hens to permit is between four and six per residence in order to minimize noise, allow for enough egg production to feed a family, and prevent chickens from becoming lonely, since chickens are social animals.vii Furthermore, some ordinances require permits to allow more hens based on property size. This can be useful for cities that have a large division between the lot sizes of urban and rural areas and enables people who have larger properties to keep more chickens. An example of this can be seen in Charlotte, NC, where a maximum of 25 hens are allowed depending on acreage. In Everett, WA, up to six hens are allowed without a permit, however additional hens require a permit (see Appendix 5).

Additionally, backyard chicken ordinances often specifically address roosters. Roosters insight more noise and aggression concerns and do not lay eggs; therefore many municipalities, like Durham, do not allow them. Other municipalities allow roosters under regulations to improve chicken happiness and fertilize eggs to produce more chickens.viii Albuquerque, NM, is a city that allows one rooster per residence (see Appendix 6).

Cities face possible backlash when their ordinance allows chickens to be slaughtered. Some municipalities do not allow the slaughtering of chickens on an owner’s property, like Nashville, TN, because it can create a nuisance, sanitation problems, and be considered animal cruelty if done incorrectly (see Appendix 7). Other municipalities allow the slaughtering of chickens for educational purposes, meat, and opening up space for new chickens when the chickens are no longer producing eggs. If cities want to permit chicken slaughtering, they can choose to enforce more relaxed or stringent regulations. For example, Rogers, AK has strict regulations in regard to chicken slaughtering, and only allows the owner to slaughter them inside the home, out of public sight. On the other hand, Albuquerque, NM has a more open slaughtering regulation (see Appendix 7).ix

One way municipalities help regulate and enforce backyard chicken ordinances is by issuing permits to keep track of chicken owners and their compliance records. However, a permitting program can be expensive for taxpayers and chicken owners alike. If the process to apply for and receive a permit is too complicated, residents may prefer to illegally own chickens. Certain cities, like Atlanta, GA, do not utilize a permitting process (see Appendix 10). Others do employ a permitting system; there are different types of processes for applying and receiving a permit that different municipalities employ. A strictly scheduled process, like Nashville, TN uses, requires the owner to renew their permit every year, while one-time permits, like Durham, NC has, can be revoked if owners refuse to comply with the ordinance in effect. The enforcement of the permit system in Durham, NC is largely based on a complaint system for cost efficiency. This complaint-driven method is one solution for dealing with incompliant backyard chicken keeping. When an ordinance is not followed, neighbors can complain and report chicken owners to the city, and it becomes the responsibility of the municipality to regulate and enforce the ordinance.

The ordinance violations may result in monetary fines, probation periods, chicken impoundment, and/or possible revocation of the chicken owner’s permit subject to the severity of each case. An example of revocation is outlined in Everett, WA’s municipal code (See Appendices 8 and 9).

Community Food Strategies is offering direct coaching and assistance to a limited number of food policy councils who are working on strategic advocacy, such as designating Agricultural Development and Farmland Preservation Trust Funds.  If your food council is interested in this support, visit toolkit.communityfoodstrategies.com/ or contact Community Food Strategies team member, Jared Cates at jared@carolinafarmstewards.org.