The Use of Publicly Owned Vacant Land for Community Agriculture 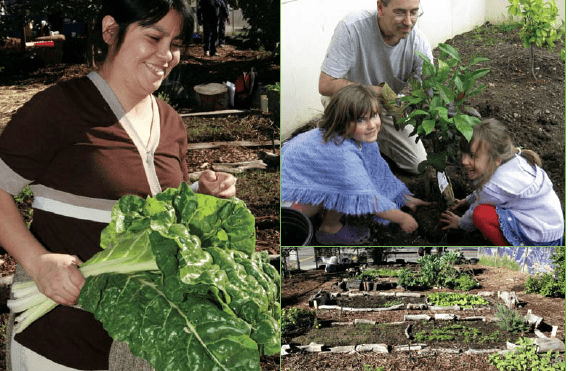 Community Agriculture provides a plethora of social and economic benefits. Although cities across North Carolina have the ability to purchase locally and regionally grown fruits and vegetables, most produce consumed in cities is imported from elsewhere. For example, in 2012 the residents of the Charlotte’s metropolitan area spent $762.4 million dollars a year on fresh fruits and vegetables. The region produced an estimated retail equivalent of around $100 million of those same fruit and vegetable products. This represents a significant opportunity for the expansion of locally grown produce within the city and its surrounding metropolitan region to fill that $662.5 million gap in demand.<sup>1</sup>

Since the 1990’s North Carolina has lost 9,000 farms and millions of acres of farmland.<sup>2</sup> The geographic gap between food production and food demand has led to the creation of substantial food deserts across the state, now identified by the North Carolina General Assembly as a significant problem. Food deserts are “urban neighborhoods and rural towns without ready access to fresh, healthy, and affordable food.”<sup>3</sup> In North Carolina, there are at least 349 food deserts across 80 counties, negatively affecting over 1.5 million state residents.<sup>4</sup> These residents are more likely to suffer from obesity, diabetes, and cardiovascular disease due to decreased access to nutritious food.

Resilient urban ecosystems that encourage small-scale agriculture production for health and economic prosperity highlight an essential opportunity in North Carolina. Communities across the state contain unoccupied, publicly owned urban land that could be utilized for sustainable regional food systems. Community agriculture can be used to bridge socioeconomic divides and create short and long-term positive economic and social impact (benefits enumerated in table below).

One policy solution emerges when municipal governments provide blighted publicly owned vacant land to community groups/non-profits through a permitting process.<sup>6</sup> A municipality may maintain a list of the vacant blighted lots within its limits (see Appendix 6), and invite community groups/non-profits to apply to utilize the land for a specified amount of time. When municipalities use permits, they are issued for free or at a nominal rate, and can be re-issued so long as the group follows the guidelines, if any, suggested by the municipality. Permit systems require distribution and enforcement by a municipality, but allow municipal governments to maintain records and enact regulations. This approach is successfully utilized in High Point, N.C. and Richmond V.A.

A fourth policy solution focuses on the economic potential of community agriculture through produce sales at local farmer’s markets and savings for gardeners who reduce supermarket produce expenses.<sup>9</sup> A study of community gardens in Newark, New Jersey yielded impressive results: The Rutgers Urban Gardening group transformed thirty acres of blighted land into 1,900 gardens with the participation of 6,500 city residents and grew produce worth over $915,000. The initiative composted 4,000 tons of city leaves and participants saved $4 million over the course of five years by growing produce in formerly garbage-filled public lots.<sup>10</sup> As with many of these policy solutions, this improves blighted pieces of public property, reduces loitering and crime, and increases neighborhoods’ property values.<sup>11</sup>

Missouri established Urban Agricultural Zones (UAZ) in 2013 (MOH 542 2013). A UAZ is a “zone that contains an organization or person who grows produce or other agricultural products, raises or processes livestock or poultry, or sells at a minimum 75% locally grown or raised food.” Organizations and individuals may apply to create a zone in blighted areas such as abandoned buildings and vacant lots. There are additional provisions in which the municipality must establish a board to advise the UAZ. The UAZ is eligible for property tax abatement for up to 25 years. The UAZ is required to pay for its water consumption, however the municipality covers 50% of the standard cost of water hookup. Additionally any sales tax revenues under 1% from the sale of agricultural products sold in the UAZ are deposited into a UAZ fund, which is managed by the state treasurer. School districts within the municipality can then apply for funds to be distributed to develop curriculum on farming practices<sup>12</sup> (see Appendix 3). Missouri’s UAZ model is one policy solution that contrasts others used by cities like Portland, Oregon, in which community agriculture is permitted in any zone (see Appendix 2).

High Point, North Carolina ranks 5th in the nation in food hardship for households with children, and 9th in the nation for those without. The High Point government, along with non-profit organizations such as the Greater High Point Food Alliance (GHPFA) and Hayden-Harman Foundation, implemented 34 community gardens on city and non-city properties across the greater High Point area. The Hayden-Harman Foundation was granted these 34 vacant lots. Community groups can select a property and apply for a $1 lease with the opportunity to renew from the foundation on an annual basis (see Appendix 4). The gardens on city-owned lots, for which there is the most data, span 5 properties and occupy 1/5th of an acre in total. Despite their size, during the 2016 fiscal year, these five gardens produced $18,000 worth of produce. Using these metrics, food production on city owned land within High Point would yield approximately $90,000 per acre, per year. Blighted city owned land, which is leased to the Hayden-Harman Foundation, has been turned into beautiful green spaces with sustainable gardens. The gardens in these low-income and formerly crime-ridden neighborhoods have become centers for community engagement while decreasing the number of people going hungry in High Point. GHPFA recently secured government financing for a garden coordinator and in-kind services, including mulch and soil, which previously posed as an economic hurtle for many community members.

Richmond’s Community Agriculture Program was established in 2011 as a way to strengthen community ties, provide access to nutritious foods, and combat obesity and associated diseases. The city encourages community agriculture by offering vacant land to non-profits, civic organizations, community groups, and similar entities. Richmond also encourages garden groups to establish policies concerning plot rental with individual gardeners. The gardening coordinator in Richmond acts as a resource for every one and the interactive webpage allows organizations and groups alike to view every available lot within the city and apply for a permit to utilize the lot(s), online (see Appendix 5). The garden group must pay a $50 initial administration fee, followed by an annual fee of $25. Groups are accepted on a first come, first serve basis and existing garden groups are given preference to renew. The City extensively outlines what the acceptable structures, mulch, plants and fertilizers are, as well as provides a cost-breakdown of different watering methods. In accordance with city code, Richmond does not waive any fee or installation cost. Additionally, no produce may be exchanged for monetary value unless the group applies for a separate commercial gardens permit, in which they will be contacted by Richmond’s Economic and Community Development Department to establish a term with a longer lease.

Regional food system: A method of food production and distribution that is geographically localized, rather than national and/or international. Food is grown (or raised) and harvested close to consumers’ homes, then distributed over much shorter distances than is common in the conventional global industrial food system. Generally associated with sustainable agriculture.<sup>13</sup>

Community Agriculture: City and suburban agriculture in the form of gardens, vertical farms, etc. that is located in vacant lots. The community is responsible for maintenance and receives benefits. <sup>14</sup>

Food Security: Access by all individuals within a community to enough food for a healthy life. <sup>15</sup>

Non-Profit Community Garden: City property used to grow fruits, vegetables, flowers, and herbs for non-commercial purposes, in which there is no exchange of goods for monetary value.<sup>18</sup>

Privately Managed Market Garden: A garden used by to grow fruits, vegetables, flowers, herbs to exchange for monetary value off-site such as at a farmer’s market or on-site at a farm stand. <sup>19</sup>

Community Food Strategies is offering direct coaching and assistance to a limited number of food policy councils who are working on strategic advocacy, such as designating Agricultural Development and Farmland Preservation Trust Funds.  If your food council is interested in this support, visit toolkit.communityfoodstrategies.com/ or contact Community Food Strategies team member, Jared Cates at jared@carolinafarmstewards.org.